Omijima Island is located in the midst of the clear ocean waters of Kita-Nagato Kaigan Quasi-National Park. With the open ocean waters off the rocky coast of Funabashi (on the west side), and the white beaches of Shizu-ura, from which a beautiful world of seaweed extends, diving and snorkeling can be enjoyed year-round on Omijima Island. Additionally, because of the island's unusual shape, divers have only to go underwater a little ways to enjoy some incredible sea life. Beginners and children as young as fourth grade (elementary school) may also participate (with some conditions).

The Otozure River runs through the center of Nagato Yumoto Onsen. From late March to early November, "kawa-yuka" riverside terraces will be set up along the river in an approved "Zone for the Regeneration of the City/Area," with which locals hope to create an environment in which to enjoy nature closer up, with the scenery and sound of the river. There will be cafés and dinner parties, parties, live music, and other Yumoto Onsen Town events presented at these riverside terraces, so that visitors can enjoy strolling through Yumoto Onsen even more.

The coastline in Yamaguchi Prefecture's Nagato City is located inside a Quasi-National Park. If you start paddling out in a sea kayak, you'll find incredible seascapes, craggy rocks, and the power of natural settings you can't reach from land. There are a lot of ways to enjoy sea kayaking here, like our course exploring 5 uninhabited islands or our sunset tour. Bonnie Bay Sea Kayak Center is located inside Igami Seaside Park Auto Camping Ground, and is a public facility. We can escort guests through the waters of Kita-Nagato Quasi-National Park according to their requests. After a lecture about how to paddle in a kayak, we will land on an uninhabited island and enjoy a coffee break. 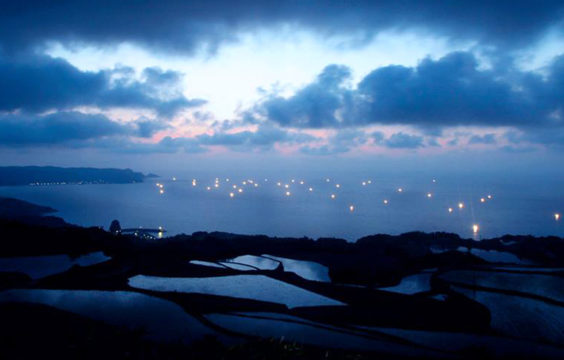 At this summer event, visitors can view the traditional summer spectacle of cormorant fishing (ukai) at Kintai Bridge, all from a pleasure boat. Dressed in traditional costumes, the cormorant fishermen will display their skill at commanding the cormorants, looking mysterious against the backdrop of the Kintai Bridge, one of Japan's Three Unusual Bridges, all lit up. Come see the incredible spectacle of the fishermen and their cormorants before your very eyes, in the wavering lamplight of the cormorant boats.

The Nagoshi Grand Festival is Hakata's representative summer festival. The ritual celebrates the purification abilities of the deity enshrined at Chikuzen Province Sumiyoshi Shrine: misogi purification (to cleanse the body with water) and harae purification (to cleanse the heart and mind). The Nagoshi festival is meant to quell an evil god of disease, and is a summer festival to pray for good health, always lively with locals. The Main Hall Festival will begin at 10:00 a.m. on July 31st, during participants can pass through a ring of straw 4 meters in diameter (the "Kaya-no-rin Kuguri" ritual, for purification), and during the Kawagishi Festival at 7:00 p.m., people will send paper dolls down the Naka River in the "Hitogata Nagashi" ritual. The Sumiyoshi deities are enshrined at Sumiyoshi Shrine, and it is said that the Nagoshi Grand Festival also stems from belief in the Sumiyoshi deities. *The legend of the Sumiyoshi deities: When Izanami, wife of the god Izanagi died, Izanagi traveled to the underworld to see her. Afterwards, to cleanse himself of the impurity of the world of the dead, he entered the ocean and performed a purification with water, from which the three Sumiyoshi deities (Sokotsutsu-no-o, Nakatsutsu-no-o, and Uhatsutsu-no-o) were born. According to the Kojiki, one of Japan's oldest historical chronicles, the ocean where this ritual was performed is said to be the land when Chikuzen Province's Sumiyoshi Shrine currently stands.

During the three hot days of this festival, all of Osaka will be purified. This is the grandest of the festivals at Sumiyoshi Taisha Grand Shrine, and as the last great festival at the end of the summer, it sees many visitors. On Marine Day in July, the "Portable Shrine Washing Rite" will begin the festival, followed by the "Yoi-miya" beginning at 8 p.m. on July 30th, the Regular Festival/Summer Nagoshi Harai Purification Ritual on the following day at 5:00 p.m., and on the final day, August 1st, the Mikoshitogyo procession will be held to transfer a portable shrine from its place in Sakai City in the evening. The festival's portable shrine weighs 2 tons. It's an impressive sight indeed as this incredible portable shrine is carried over the curved Soribashi bridge. On the evening of Marine Day in July, the portable shrine will be cleansed in Sumiyoshi Park. - This ritual is held to purify the portable shrine before its journey to its temporary resting place in Sakai City. The Yoiyama Festival begins at 8 p.m. on July 30th, and the Regular Festival/Summer Nagoshi Harai Purification Ritual begins at 5 p.m. on July 31st. - During the Summer Nagoshi Harai Purification Ritual, Nagoshi girls in splendid costumes will take a piece of straw, and pass through the purification wreath three times before going to the main shrine. This ritual is also designated a Folk Cultural Property by Osaka Prefecture. Kagura court music and dancing (Kumano dancing) and Sumiyoshi-odori dancing will be performed at the main shrine (Dai-ichi Moto-miya). The portable shrine procession (Mikoshitogyo) will be held in the afternoon on August 1st. - This procession is held to transfer the spirit of the Sumiyoshi Daijin deity to a temporary home in Sakai City. The passage of the heavy shrine over the curved Soribashi bridge and through the Yamato River is a truly gallant sight. You're sure to be impressed by the strength on display.

The Miyajima Waterside Fireworks Festival is a big event, lighting up the summer night on Miyajima. The event is characterized by the sound and fantastical light of the fireworks, and the illusion that they've been thrown into the sea. The World Heritage historical buildings (the Grand Torii Gate and the shrine building of Itsukushima Shrine) will be bewitchingly lit for just a moment in time. The scene of the fireworks exploding over the water makes this an especially popular location for photography fans, and the festival has even been selected as one of Japan's 100 Fireworks Festivals. Japan's 100 Fireworks Festivals are selected for the best locations, making them the top festivals amongst photographers. About 5,000 fireworks (simple fireworks, star mines, etc.) will be lit, with 150 in the water (100 fireworks with a diameter of about 30 cm). The festival is said to be unusual for the 100 fireworks that will be lit from the water.