Omijima Island is located in the midst of the clear ocean waters of Kita-Nagato Kaigan Quasi-National Park. With the open ocean waters off the rocky coast of Funabashi (on the west side), and the white beaches of Shizu-ura, from which a beautiful world of seaweed extends, diving and snorkeling can be enjoyed year-round on Omijima Island. Additionally, because of the island's unusual shape, divers have only to go underwater a little ways to enjoy some incredible sea life. Beginners and children as young as fourth grade (elementary school) may also participate (with some conditions).

The Otozure River runs through the center of Nagato Yumoto Onsen. From late March to early November, "kawa-yuka" riverside terraces will be set up along the river in an approved "Zone for the Regeneration of the City/Area," with which locals hope to create an environment in which to enjoy nature closer up, with the scenery and sound of the river. There will be cafés and dinner parties, parties, live music, and other Yumoto Onsen Town events presented at these riverside terraces, so that visitors can enjoy strolling through Yumoto Onsen even more.

This is one of Yamaguchi Prefecture's famous cherry blossom-viewing spots, and every year it sees many visitors from across the prefecture and beyond. The temple grounds will be colored with the blossoms of about 120 trees: Yoshino cherries, weeping cherries, and yae-zakura cherries. The best spot to view the cherry blossoms at Tainei-ji Temple is along the temple road from in front of Tainei-ji's Main Hall to Toyokawa Inari Shrine. Enjoy the gentle spring sunlight and the temple path covered in blooming flowers with a nice walk. The blossoms are wonderful in full bloom, of course, but they are also beautiful fluttering away in the breeze. Come snap a shot of these dancing blossoms near the historical relics and locations of three Shakyamuni Buddha statues, a statue of the 16 arhats, and the reflecting pond in which samurai Ouchi Yoshitaka saw his reflection for the last time, and the stone on which he placed his helmet there. During the cherry blossom bloom (around early April), there will also be a nighttime light-up of the cherry blossoms, from sunset to 11:00 p.m. Come enjoy the cherry blossoms as the spring nights begin to warm up. 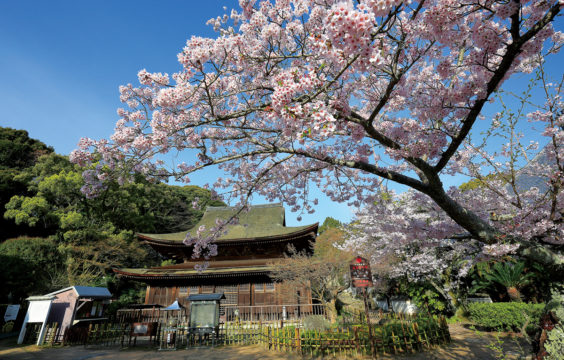 The coastline in Yamaguchi Prefecture's Nagato City is located inside a Quasi-National Park. If you start paddling out in a sea kayak, you'll find incredible seascapes, craggy rocks, and the power of natural settings you can't reach from land. There are a lot of ways to enjoy sea kayaking here, like our course exploring 5 uninhabited islands or our sunset tour. Bonnie Bay Sea Kayak Center is located inside Igami Seaside Park Auto Camping Ground, and is a public facility. We can escort guests through the waters of Kita-Nagato Quasi-National Park according to their requests. After a lecture about how to paddle in a kayak, we will land on an uninhabited island and enjoy a coffee break.

This event has ended

The Kawachi Wisteria Garden was selected in an online feature by CNN as one of the "31 Most Beautiful Places in Japan." Every year during Golden week, when the wisteria burst into bloom, it's a popular spot with visitors from across and outside of Japan. There are a total of 22 different varieties of wisteria, including Noda Japanese wisteria, kunibeni (lipstick) wisteria, purple-red, red, white, yae (multi-layered), long, medium, and short. In the gentle spring sunlight, you'll be surrounded by the elegant fragrance of the wisteria that extend into the garden. One of its highlights are the two wisteria tunnels close to the garden entrance. There is a smaller tunnel of 80 meters, and a larger one of 110 meters, and each elegant light purple and white arcade is likely to draw gasps from visitors. We recommend taking some commemorative photos here. The wisteria trellis extends for about 3,300 square meters. The Kawachi Wisteria Garden is in fact a private garden, created by its passionate owner. He began cultivating the land in 1968, and after dedicating a great effort over a number of years, he opened the garden in 1977. Looking around at all of the branches heavily-laden with wisteria, one can see all the love he put into cultivating them. This Golden Week, we encourage you to include the wisteria bloom at the Kawachi Wisteria Garden in your schedule as your travel.

This traditional ritual and show of bravery (Ogori Archery Horseback Ritual) is held every year on the second Sunday of April. Many visitors flock to the shrine grounds from Japan and elsewhere for a chance to see this once-yearly sacred ceremony. In fact, the 250 meter-long horse-riding track is the oldest of its kind still in use at present. Around 600 years ago, during the Kamakura Period (1185-1333), it was built in imitation of the horse-riding track at Tsurugaoka Hachimangu Shrine, and as the only horse-riding track in Japan that retains this original shape, it has been designated a historcial landmark by Shimane Prefecture. Dressed in Kamakura Period hunting costumes, the riders will shoot arrow after arrow from horseback, tension rising amongst the onlookers at the horse hooves thunder closer, and then the thwang of the arrow releasing it, which may produce a shout from the audience. A viewing gallery has been established since 2019 for a fee. (In 2019, 4 seats were 2,000 yen, including a souvenir) The viewing gallery is recommended for those who want to capture the dramatic scene on video.

The Toka Festival Noh Performances are held annually over the course of three days, from April 16th-18th, on the Noh theater stage at Itsukushima Shirne. The festival began in response to the 1551 betrayal and murder of the Ouchi Clan at Tainei-ji Temple (at Nagato Yumoto Onsen) by their former retainer, Sue Harutaka. To avenge this betrayal, the samurai Mori Motonari fought and vanquished Sue at the Battle of Itsukushima (1555), after which Mori began these rituals in 1563. Kyogen noh performances from the Kita, Kanzen, and the Okura school are performed. (Kita-style Noh is performed on the 16th, the first day; Kanzen-style on the 17th, the second day; and Kita-style again on the 18th, the third day.) There is an account in the "Fusa-aki Chronicle" saying that in 1568, when the master of the Kanze school left the capital, "Excuse my getting straight to the point. A stage was built in the inlet, and a performance of the 9th Noh piece was performed, afterwhich the 10th piece was performed on a stage built at the home of Tanamori Fusa-aki." After the great Battle of Sekigahara, too, the Fukushima and Asano samurai clans took over power of the province from the Mori, and a magistrate of Miyajima was established directly under the province's control, developing Miyajima into a tourist destination. As the Meiji Period approached, with the start of a new historical period, the springtime Omiya Festival came to be called the "Toka Festival," and every year, for three days beginning on the 16th, ritual Noh theater performances were held at this festival. On the first and second days, Noh plays centered around the figure of an older man ("okina") will be performed first, and a number five Noh on the third day.