See the wonder of the shrine offeratory box located at a height of 6 meters. 123 torii gates are lined up here along this sheer cliffside.

Chosen by CNN as one of the "31 Most Beautiful Places in Japan," this extraordinary shrine is located on the edge of a sheer cliffside. We especially recommend this shrine for three particularly photogenic views. On the side of the Japan near the "Dragon's Spout," a periodic burst of sea spray designated a National Natural Monument, one can enjoy the view from across the cliffside, and see exactly how close this shrine was built to the edge of the sea. This was done on purpose, as the shrine was originally built to pray for good catches and safety at sea, according to a message by a sacred white fox said to have appeared at the bedside of the head fisherman. The next view is that of the 123 torii gates one can see looking up from the "Dragon's Spout." Within an elevation change of about 100 meters, the view of the blue skies, the green of the trees, the red gates in the center, and the blue skies that extend to the right side make for a photo you'll definitely want to capture. Afterwards, after passing through all of the torii gates, you'll reach the shrine offeratory box, located 6 meters in the air. In a rather unusual scene for an offeratory box, each time a coin successfully falls into the box, it's met with cheers. It's a good spot to take a video to remember your travels! The blue seas are beautiful from summer to fall, but we recommend photographing the white waves of winter. During this period when the northeasterly winds and the chilly winter breezes make for rougher seas, it's said to be an opportunity to see the high sprays of the "Dragon's Spout." Also nearby are other famous Nagato locations, like the Senjojiki Plateau and the Yuya Terraced Rice Fields.
*If the shrine doesn't appear in your car navigation system, try searching for the "Dragon's Spout" (Ryugu no Shiofuki). 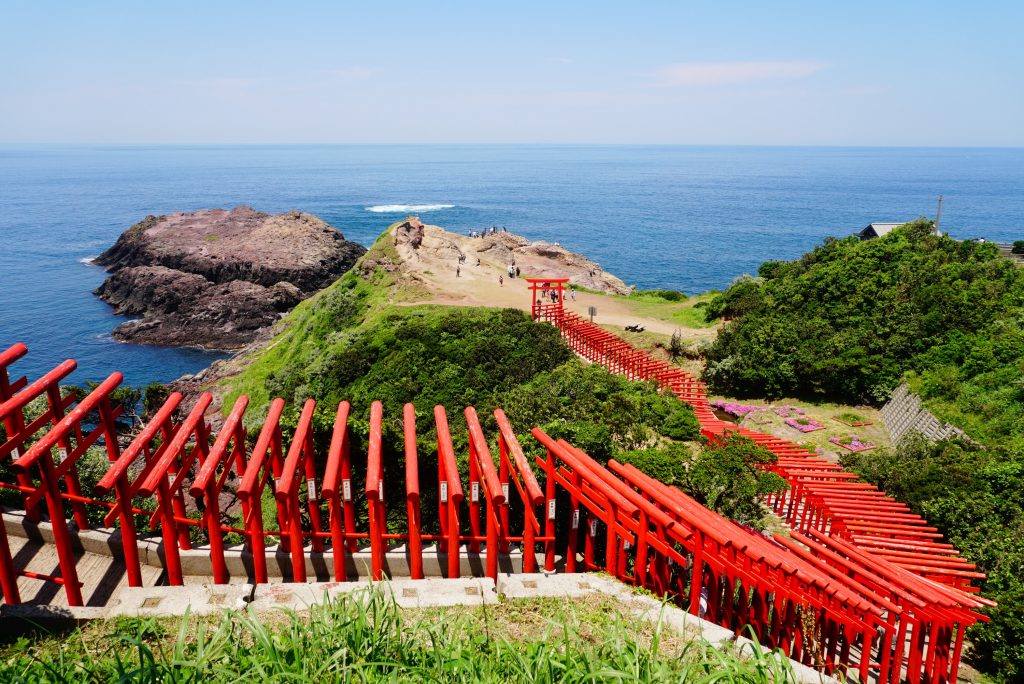