A scenic spot to photograph the lights of squid fishing boats with the sunset! The Yuya Terraced Rice Fields, which were chosen as one of “Japan’s 100 Best Rice Fields.” 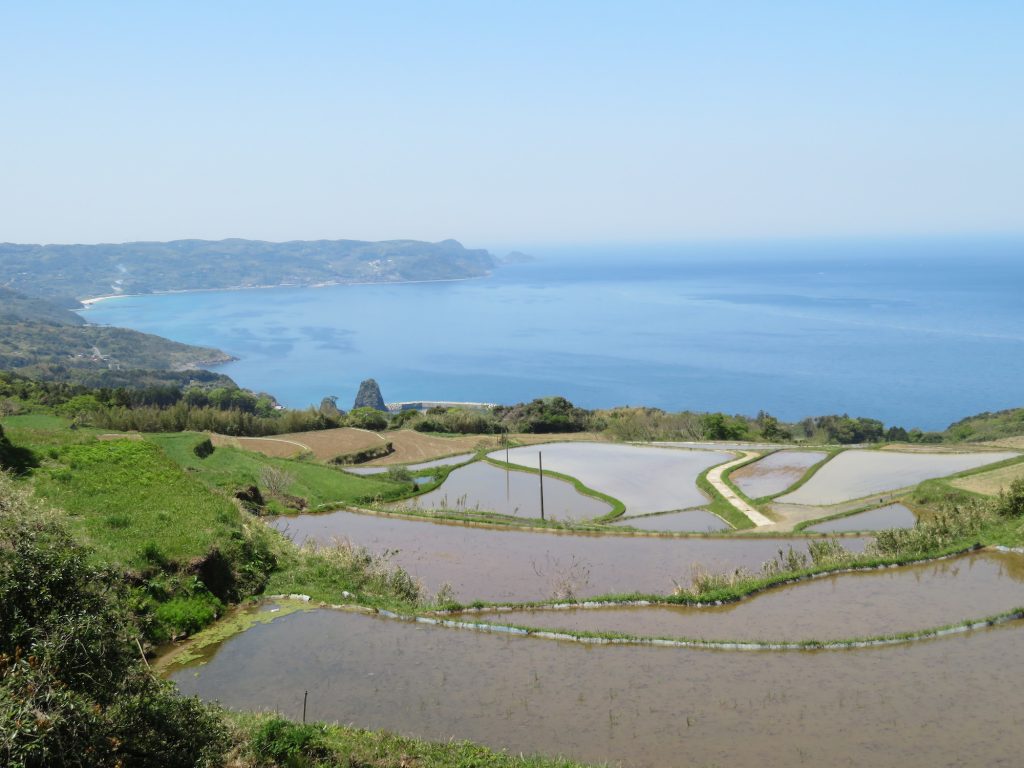 The Yuya Terraced Rice Fields were selected as one of “Japan’s 100 Best Rice Fields.”

How about capturing a shot of some spectacular rice fields with the Sea of Japan as a backdrop? The Yuya Terraced Rice Fields are located about ten minutes from Nagato’s famous Motonosumi Inari Shrine, and look out on the sea from the Yuya Peninsula. Nearly 600 hectares of rice fields spread out here, especially across the Mukatsuku Peninsula, the westernmost part of Japan’s main island. A terraced rice field is the name given to water-filled rice fields built in steps along the slopes of hilly or mountainous regions. The Yuya Terraced Rice Fields are built in steps or layers along a slope facing the Sea of Japan. Until mid-June when the rice plants begin to sprout, there’s something nostalgic about the rustic sight of the rice fields filled with pools of water. The Kawashiri Cape juts out on the right-hand side of the photo, and in the center of the photo, a standing rock figure of the goddess Kannon, also known as the “married cliffs.” Before the rice stalks sprout (around early June), on days when the weather is fair, the sunlight shining on the surface of the rice fields and the Sea of Japan makes for some breathtaking scenery. Evening on sunny days is a particularly beautiful time to visit, in which the round sun sinks slowly into the sea, lighting up the rice fields in a spectacular sight. To be sure, the green rice fields of summer, and the rice fields filled with golden stalks of rice in autumn are also lovely to photograph. These fields are perfect to visit together with Nagato’s Motonosumi Inari Shrine. (Picture above: Taken May 12, 2018; Picture below: Motonosumi Inari in the direction of Tsuo, and if you turn to the right, you’ll see the scenic lookout at Senjojiki) 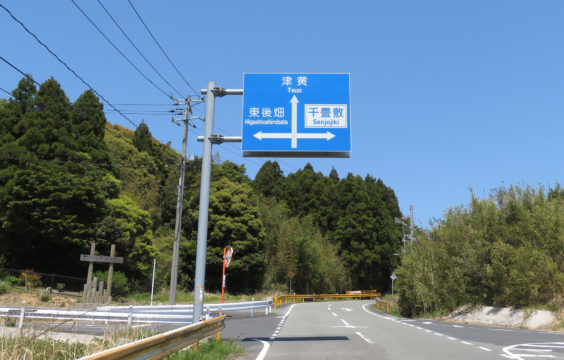 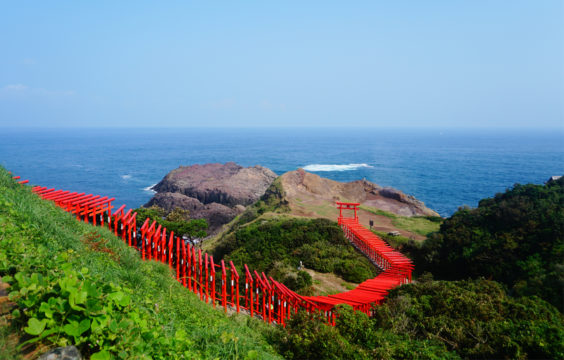 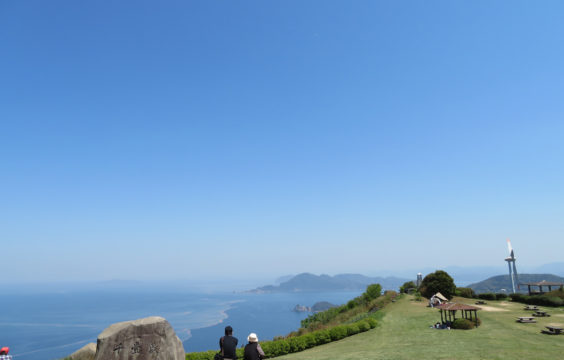 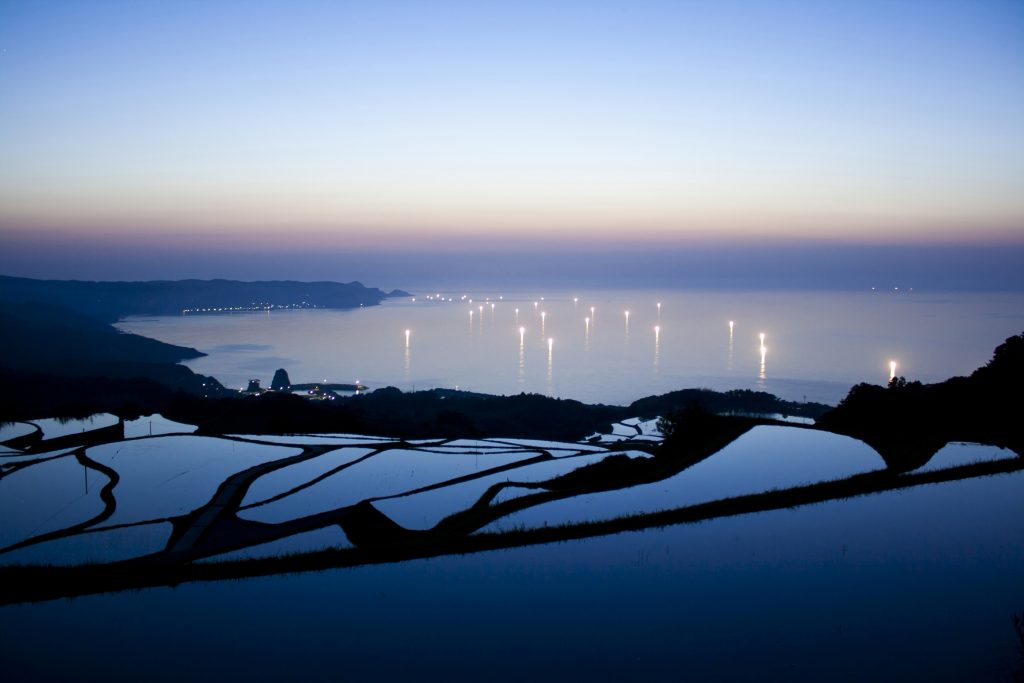 We’d also like to give special mention to the rice fields from mid-May to early June, during which time the setting sun is reflected in the mirror-like surface of the water in the fields, and in the evening, cameramen flock here from across the country. The Yuya Terraced Rice Fields are actually a popular spot for photographers for the lights of the squid-fishing boats that reflect in the rice fields. The sight of these boats lighting up one by one, taking the place of the sun as it sets, is one that photographers feel compelled to capture. This all takes place in the brief moment before things become completely dark, in the 30 minutes before the sun sets. Of course, there are days when the winds are strong and the boats cannot go out to fish, or cloudy days when photographers may not be able to take such beautiful shots. (Photo courtesy of: Oidemase Yamaguchi Photo Studio, Yamaguchi Prefectural Tourism Federation)

When is the best time to photograph it?

The scenery is particularly beautiful to photograph when the rice paddies have been flooded, but before the rice stalks have begun to grow. It’s just around this time of year that the squid will be having their babies and be swimming near the coastline, so the squid boats will also be out fishing along the coast. Because of this, you should also be able to catch beautiful shots of the floating lights of the squid boats out at sea. After September, fishing will move out to the open sea, and the fishing lights will move further away. (Photo below: Photographed June 11, 2011; Photo above: Taken at 7:21 p.m., 7:32 p.m., and 7:50 p.m. Sunset on this day was at 7:26 p.m.) » Look up sunset times for Yamaguchi Prefecture (on the National Astronomical Observatory of Japan Website) 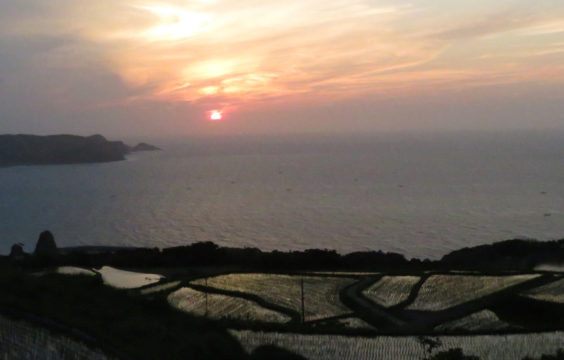 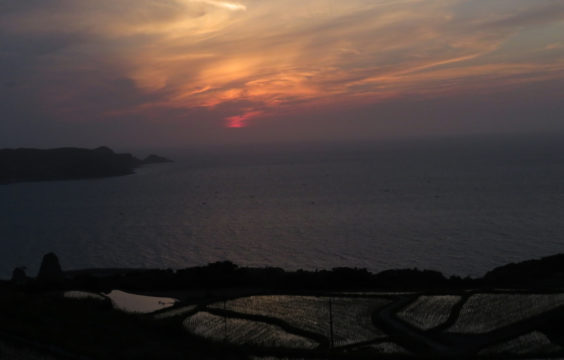 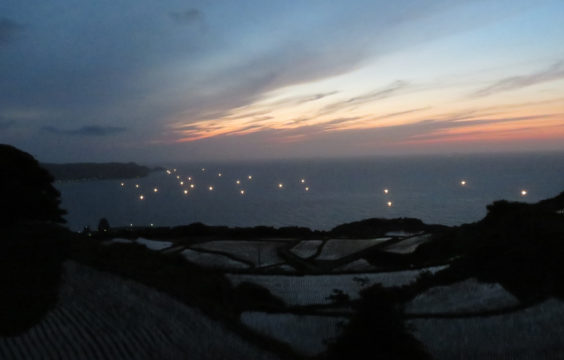 What is the “Japan’s Top 100 Rice Fields” ranking?

The Yuya Terraced Rice Fields were selected as one of “Japan’s 100 Best Rice Fields,” released in 1999 by the Ministry of Agriculture, Forestry and Fisheries. 117 cities and towns and 134 areas were selected from across Japan, but out of these, the Yuya Terraced Rice Fields were highly rated for being terraced fields that spread out close to the ocean. The 25th National Rice Field Summit will be held in Nagato City from October 12 (Sat) – 14 (Mon), 2019. Special snacks you can only find in Nagato, which are made with rice from these fields will also be on sale. Come try some of Nagato’s local specialities! 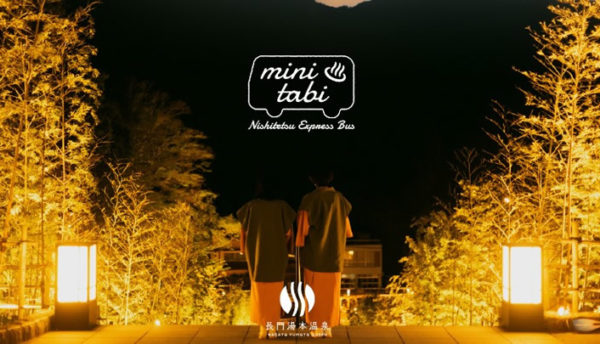 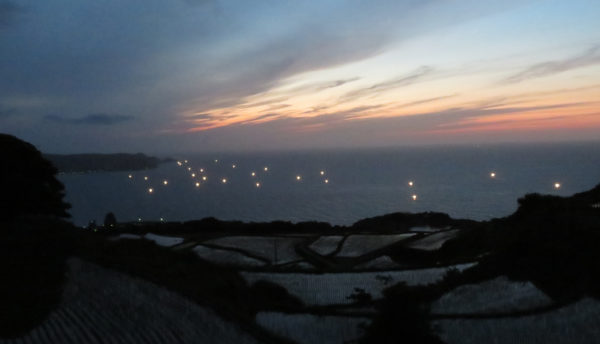 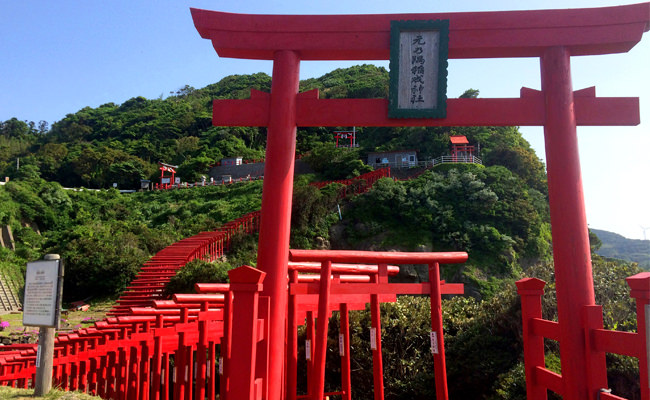