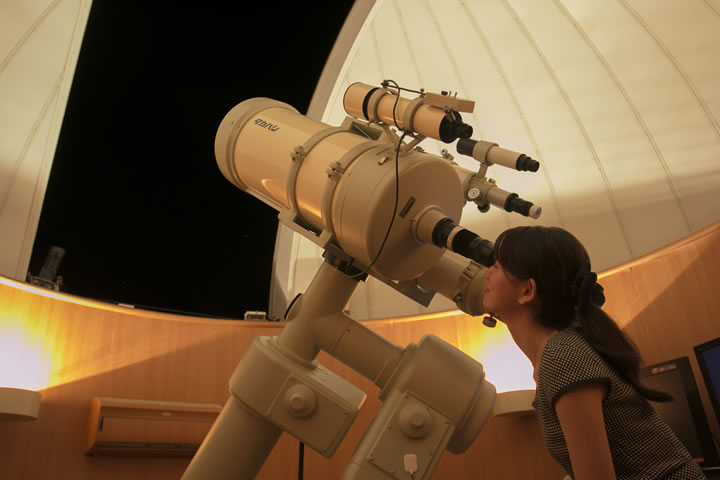 This month, we’ll once again be able to see Albireo in the constellation Cygnus and Antares in the contellation Scorpio in the Great Summer Triangle. The Great Summer Triangle is visible at night in spring, summer, and winter; and combined with the legend of Tanabata, the Star Festival, the Great Summer Triangle is especially well-known by many. Because all of its stars all strongly shining first magnitude stars, they’re fairly easy to see, even from the city. First, Vega, Princess Otohime’s star in the constellation Lyra, is the brightest of the three stars. The four stars lined up in a quadrangle beside it form the shape of a koto, a traditional Japanese stringed instrument. Because Vega’s apparent magnitude is 0.03, close to 0, Vega is used as a standard star against which other stars are measured to be of the same magnitude or not. In these cases, if Vega is a magnitude zero star, a celestial body with 1/100th the brightness would be considered a fifth magnitude star. In the plus mark-shaped constellation of Cygnus that seems to cut through the Milky Way, you can find Albireo and in the tail portion, Deneb. Because Deneb is some 1,400 light years away, it appears darker, about a 1.3 magnitude, but in reality it’s far larger than Vega, 200 times larger than the sun. And Altair, the star of Hikoboshi in the Tanabata legend, in the constellation of Aquila, is a 0.76 magnitude star. Across the Milky Way from Vega, you can find Altair at the bottom right of the Great Summer Triangle at around 9:30 p.m. In the legend of Tanabata, the two separated lovers these stars represent can meet just once a year, on July 7th, but Vega and Altair are actually separated by a distance of 15 light years, and while fairly close when compared with the Earth, it would still take 15 years to reach one another traveling at the speed of light. While the great summer stars often appear far away from one another, if you take a look at them through the telescope, they’re sure to feel much closer.

Legends related to the stars of July 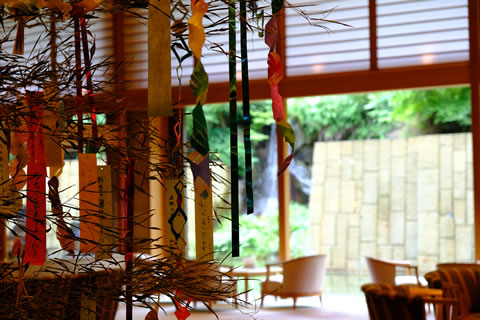 What is the connection between Tanabata, the Star Festival, and making wishes?

Every year, as Tanabata draws close, even we at Otani Sanso decorate our lobby lounge with stalks of bamboo (the traditional decoration), and leave strips of paper for our guests to write their dearest wishes (it’s tradition for people to fasten their written wishes to bamboo stalks). Though this tradition doesn’t appear in the legend of Tanabata, it is said that it originates in the Chinese Festival to Plead for Skills. The star of Princess Orihime, which appears in Tanabata, is a star for the work of flag weaving, and ceremonies were held to pray to this star for superior sewing skills. It seems that people would hang their wishes as decoration from bamboo stalks, which were said to ward off bad fortune. Nowadays people write all sorts of wishes. How about writing one of your own to hang from the bamboo, as a promise to Vega in the constellation of Lyra?

Why is the Milky Way easier to see in the summertime?

The Milky Way is visible year-round, but why exactly is it said that it’s clearer to see during the summer than in other seasons? The Milky Way is in fact the galaxy to which our solar system belongs, as seen from the side. The galaxy is shaped like a disc, and its stars are especially concentrated together in the center, around which stars spread out thinly to the sides. In summer, the sky opens up to face the center of the galaxy, making the number of visible stars greater, but in winter, we face the side of the galaxy opposite its center, and as we’re only able to see the edge of the galaxy, the Milky Way looks thin to us. The center of the galaxy is located in the direction of Sagittarius, next to the constellation Scorpio, and is where the Milky Way appears the brightest. Try to take a look at it on the night of a New Moon, with little moonlight.

Information about the stars in July

When the rainy season seems to go on and on, even just a little bit of sunshine is a pleasure to see. There are some days when we may not be able to see through the telescope because of cloud cover, but in this event we will provide an explanation using past photographs, so please come and visit us at the Observatory Dome. 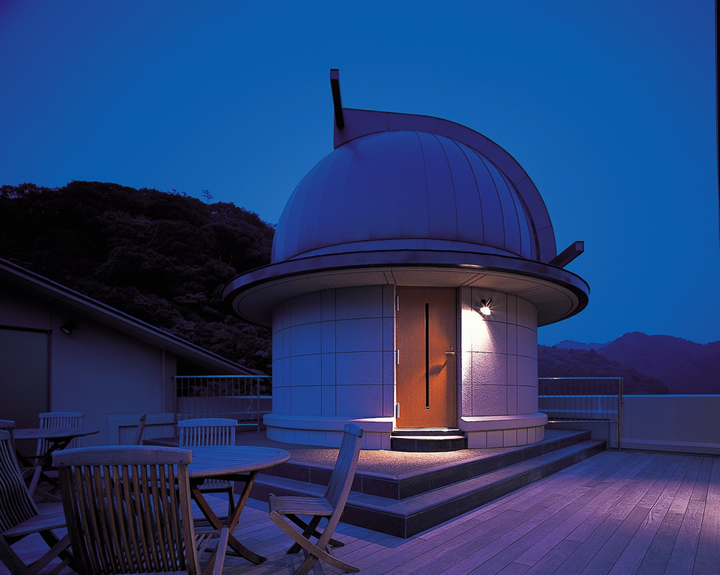 Observatory Hours…7:30 p.m. – 10:10 p.m.
Closed on… Every Tuesday
Location… Otani Sanso Roof (Just beside the gallery on the 8th floor)
Price… Free for overnight guests (Viewings available to those who reserve first)
Using the Observatory… Viewings are available to those who reserve first (12 seats per viewing)
※There is a limit on the number of people

Please inform us of your desired reservation time from the times listed above (Please tell us via telephone, or write it in the “requests” field)
*You may not be able to participate in a viewing if a time slot is fully booked, or due to weather conditions.
*Should you be unable to participate in a viewing due to weather conditions, you will be able to see a video from a past viewing.

See details about the Astronomical observatory