The Pleiades star cluster, famous for the star Subaru, will come into view. Come out and see the Star Mira, in whale constellation Cetus at its best. 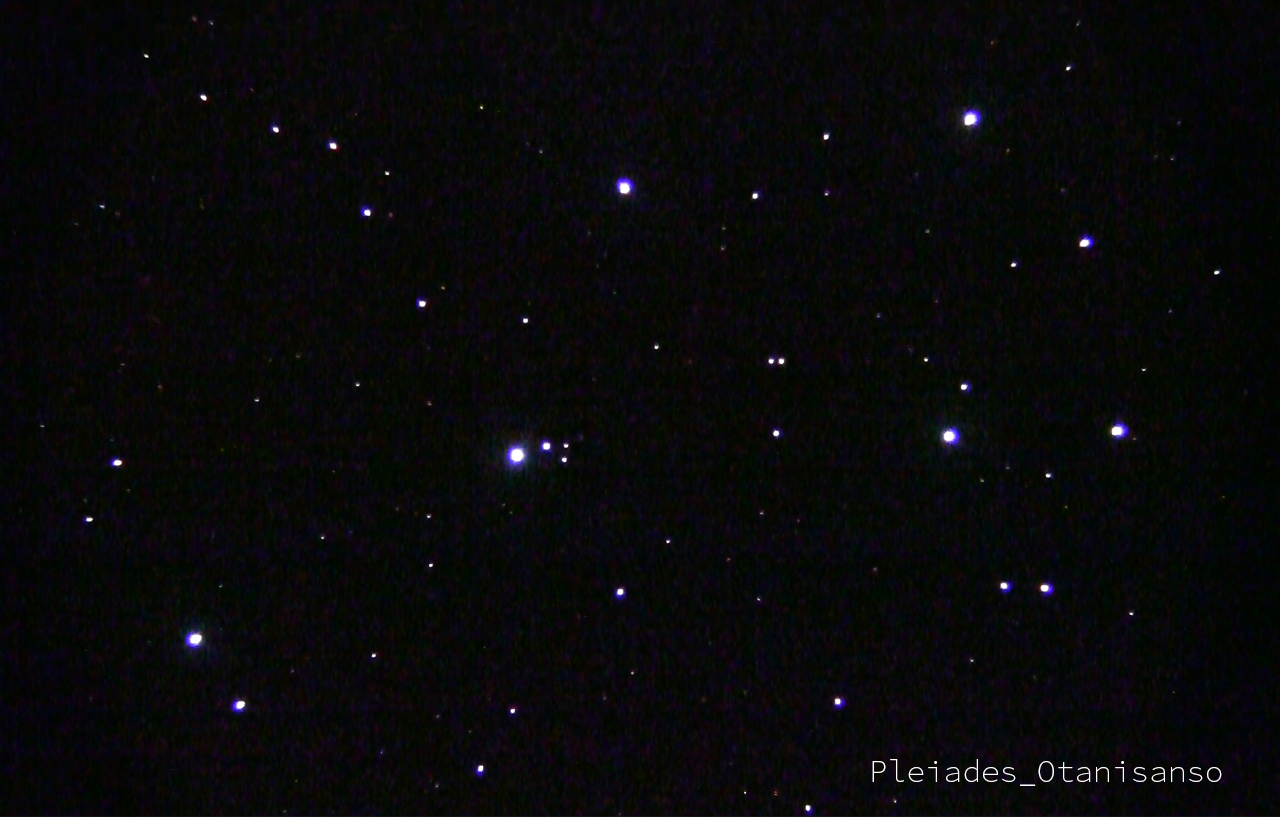 Hello, this is the Otani Sanso Astronomical Observatory Dome.Today we’ll be discussing what’s visible in Nagato Yumoto Onsen’s night skies in November, 2019. (Image: A photograph of the Pleiades star cluster and Subaru, taken through the telescope at Otani Sanso’s astronomical observatory dome in the past)

During winter, many star clusters and first magnitude stars can be seen with the naked eye

Since November began, the stars in the eastern sky have begun to appear ever faster. The star-gazing season has arrived at last. More than any other time of year, the stars appear at their most beautiful in winter. The reason for this is that the cold air makes for clear viewing, and there may be fewer particulates in the air, but with many bright first magnitude stars, and clusters of stars like the Pleiades star cluster and Orion nebula, there is plenty to be enjoyed with the naked eye, too. Highlights of this month’s star-gazing include the Alpha Persei Cluster and the Pleiades in the constellation of Perseus, which came into view last month, and the star Mira in the constellation of Cetus, which will reach its peak viewing condition in mid-November. The star Mira is named with the Latin for “wonderful” or “astonishing.” It is a pulsating variable star, and its brightness changes as the size of the star itself changes. It is expected to reach its peak in mid-November, but as its name suggests, it is difficult to predict exactly with what brightness we’ll be able to see the star. During this period, take some time to search for Mira together with the observatory staff. The next object of focus is the Pleiades star cluster. This winter constellation is familiar to the Japanese as “Subaru.” Located relatively close to the earth (at a distance of about 408 light years), it’s known as an open star cluster with several tens of blue/white stars. The blue/white shimmer of these stars is proof of how incredibly hot they are burning. Because of their intense burn, it’s said that the stars live relatively short lives of around 1 hundred million years. 6 of these stars are visible with the naked eye. When you connect each of these stars…can you see a familiar logo? As you head home from your trip, we encourage you to take a look up at the night sky.

What is an open cluster?

Stars are constantly being born from gas and dust. Typically, stars are born in cluster shapes. These young star clusters are known as open star clusters. (Image: A photograph of an open cluster. Perseus Double Cluster, photographed through the telescope at Otani Sanso’s astronomical observatory dome in the past) 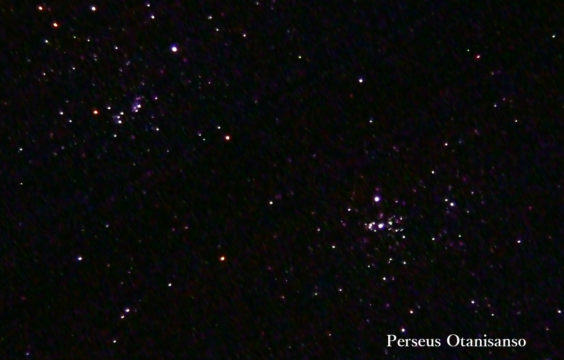 Legends surrounding the stars of November: What is the pulsating variable star Mira, in the constellation Cetus?

The star Mira, in the constellation of Cetus, will reach its peak in mid-November. Located right in the chest area of this whale-shaped constellation, this star (a pulsating variable star) shines with dramatically different light depending on when it is viewed. Usually, astronomical brightness is measured in terms of magnitude: for example, Spica (in the constellation Virgo), a star that shines in the summer skies, is a first magnitude star. So what magnitude is Cetus’ Mira? The answer is that for a period of about 332 days, its brightness fluctuates from anywhere between second magnitude and 10th magnitude. Why does it have so much variation? As it turns out, Mira is nearing the end of its life, and the star is in an unstable state, in which is grows and shrinks in size. Because of this, the star grows in size and cools = gets dimmer (minimum – 10th magnitude), and shrinks in size and grows hotter = gets brighter (maximum – 2nd magnitude). The name given to stars whose actual volume grows and shrinks is a “pulsating variable star.” Because the timing of Mira’s fluctuations, and the brightness of its brightest period is not always the same, it’s a star whose pattterns are particularly difficult to predict. “Mira” is Latin for “wonderful” or “astonishing.” The star is expected to reach its peak in mid-November, but just how bright a star we may see will simply depend on the viewing time. In this chilly weather, when you bring your shoulders up to your ears for warmth, come search for something astonishing in the chill night sky above.

*How to find Mira in the Cetus constellation-Reference: See “peak of Mira” image on the National Astronomical Observatory of Japan Website (Japanese only)

Information about the stars in September

Sunset occurs at 5:06 p.m. in Nagato. At night, temperatures are around 10 degrees Celsius, and you’ll start to feel the arrival of winter. When you come out to experience the chilly clearness of the starry skies, please dress warmly. We look forward to seeing you.

If you’d like to see more information about the night skies,  the National Astronomical Observatory of Japan is extremely interesting. Please take a look.