【October in the Observatory】The Night of the Full Moon and the Double Cluster in the constellation of Perseus. Come and enjoy the autumn nights!

The brilliance of the moon on the Night of the Full Moon, and the mysterious glimmer of the Double Cluster of Perseus. In the lengthening autumn nights, come see if you can find their beautiful shimmering light. 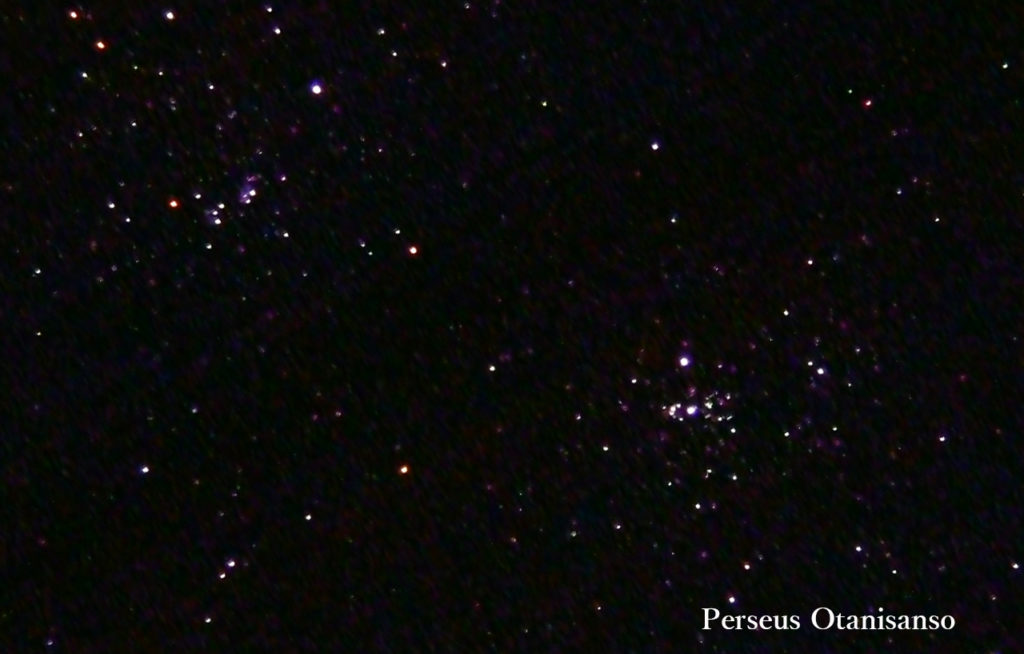 Hello, this is the Otani Sanso Astronomical Observatory Dome.Today we’ll be discussing what’s visible in Nagato Yumoto Onsen’s night skies in October, 2019. (Image: A photograph of the Perseus constellation’s Double Cluster, taken through the telescope at Otani Sanso’s astronomical observatory dome in the past)

Take a look a the mysterious light of the young stars in the Double Cluster through our telescope, laid against the shimmering background of the Milky Way 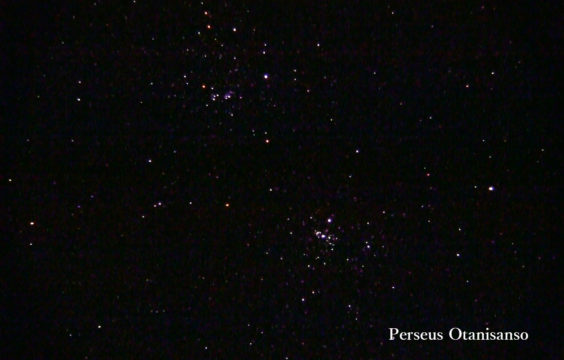 Beginning around October 17th, we will begin to be able to see the beautiful glimmer of the Double Cluster in the Perseus Constellation. Two masses of nearly 300 young stars cluster together here, each emitting a blue-white light that shimmers remarkably in the night sky. The Double Cluster is located on the northern edge of the Perseus Constellation, close to the boundary of Cassiopeia, and shining against a background of the Milky Way. If you observe it through a telescope, the Milky Way behind it emits an even more mystical shimmer, drawing you in with its beauty. It seems that one can make out the Double Cluster with the naked eye, too, but we highly recommend taking a look at it through a telescope, together with the Milky Way. Another beautiful shining light we’d like you to take a look at in October is the “Night of the Full Moon” (the moon of the 13th day of the 9th lunar month). This moon is known as the next beautiful moon to following the Harvest Moon, and in 2019 we’ll be able to see it on October 11th. Unlike the Harvest Moon, the moon on the Night of the Full Moon will not actually be a full moon. This is a custom born from the Japanese love for the beauty of the imperfect. The month of the Night of the Full Moon sees a relatively large number of clear days, and because the likelihood of catching a clear view of the moon are so much higher, it is even said that, “There are no clouds on the Night of the Full Moon.” » See more about the Double Cluster of the Perseus Constellation (Japanese only)

Stories related to the October stars: Japan’s unique tradition of the “Night of the Full Moon”

The “Night of the Full Moon” moon that isn’t actually full, and why it’s so beloved by the Japanese.

Unlike the night of the Harvest Moon, the “Night of the Full Moon” is not always, strictly speaking, a full moon. So why is it that this un-full moon is so beloved by the Japanese? Since long ago, the Japanese have had an artistic appreciation for the beauty of the imperfect. The “Night of the Full Moon” is also famous as the title of a short novel by the female author, Ichiyo Higuchi. The chilly, dignified writing of this novel perfectly brings to mind the chilly evening sky of the Night of the Full Moon. Entrust yourself to the natural flow, and experience a love for the beauty that can only be experience on this day, in this season. Surrounded by nature here at Otani Sanso, we invite you to come and enjoy this shift into autumn.

Information about the stars in October

Sunset in Nagato is at 6:01 p.m. At night, temperatures are around 15℃, making things a bit chillier. We hope you will enjoy the longer nights in autumn here in the quiet of the mountains, and look forward to seeing you soon.