【April in the Observatory】Observe the star Arcturus, representative of the night sky in spring. Come see the great triangle of spring!

In May, we’ll be showing you the powerful full moon, as well as the spring stars Arcturus, Spica, Denebola, and Cor Caroli, which together make up the “Spring Diamond.” 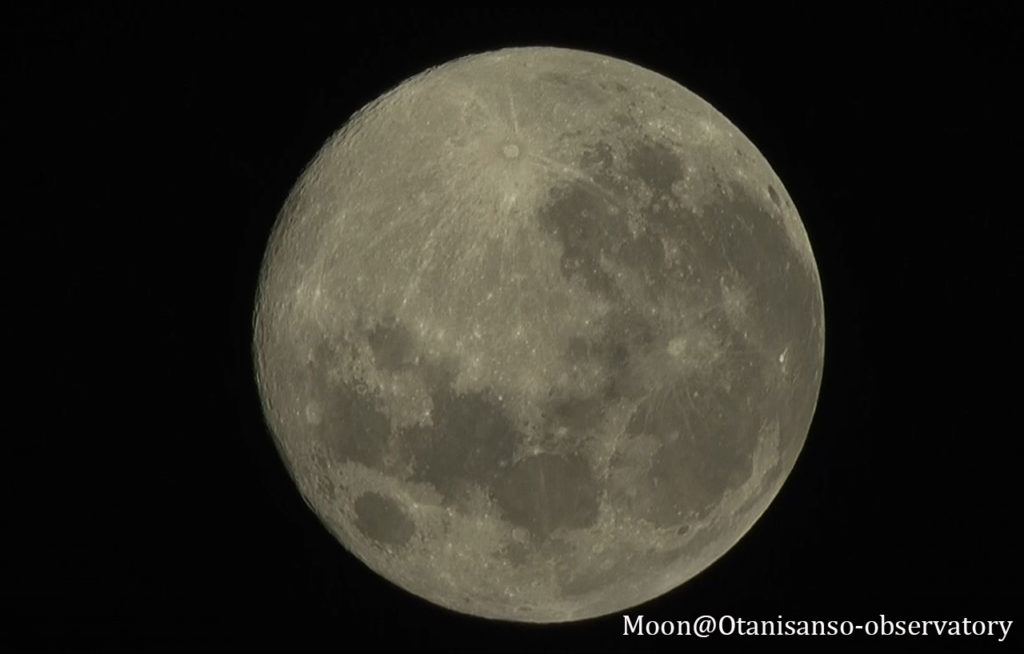 In May, we’ll be observing the New Moon, Waxing Moon, and Full Moon, perfect for the theme of new beginnings

Greetings from the Otani Sanso Astronomical Observatory Dome.Today we’ll be discussing Nagato’s night skies in May, 2019. During May, visitors will be able to view the beauty of the full moon, as it will become full during operating hours at the astronomical observatory. To be specific, from May 8 (Wed) – 19 (Sun), we will observe the New Moon as it transforms into a Waxing Moon (during which phrase the right side of the moon will be visible), and finally into a Full Moon. In ancient Japan, when the lunar calendar was in regular use, the phases of the moon governed the cycles of people’s daily lives. This cycle began with the New Moon and reached completion with the Full Moon. The Full Moon marked a turning point, signifying that all things had reached a point of completion. As the words, “Make a wish on the New Moon and it will come true,” suggests, the light given off by the moon shines with a beauty that surpasses all the other wishing stars. Our earth’s only “Moon” shares a very close relationship with our global environment. Enjoy this opportunity to take a look at our Moon a little bit closer. (Photo: Taken at the Otani Sanso Astronomical Observatory Dome. It shows the “Surface of the Moon” as seen from earth.

As in April, we’ll be able to see the Great Spring Curve and the “Spring Diamond”

First, let’s look for the Great Spring Curve with Mizar (in the Big Dipper)

Next, let’s find the Great Spring Triangle and the Spring Diamond

Once we’ve located Mizar, and then Arcturus and Spica, let’s find the star Denebola, which is part of the constellation of Leo. It lies just across from Arcturus. If you draw a line connecting Arcturus, Spica, and Denebola, you’ve completed the “Great Spring Triangle.” Just across from Spica, near the “tail” portion of the constellation Ursa Major, you’ll find the star Col Caroli in the constellation of Canes Venatici. If you connect Col Caroli to Denebola, you’ll find the “Spring Diamond.” In the large telescope at Otani Sanso’s astronomical observatory dome, you’ll be able to observe Arcturus, Mizar, and Col Caroli. You may even be able to observe stars like Alcor and Col Caroli, double stars in white and purple, which are difficult to discern with the naked eye.

See information from the Astronomical Observatory Dome from April

Greek myths associated with the stars of May: Corvus, the Crow Constellation

The “Crow Constellation” Corvus that shimmers in the southern spring skies

The constellation Corvus can be seen in the southern sky, and forms the last portion of the Great Spring Curve. In Japan, it can be observed for a period of five months, from March to July, during which the best time to view it is in late May. The constellation’s four stars form a shape like a pedestal, making them relatively easy to spot (in Japan, the constellation is also called the “Sail Star”). The key to finding it are the two stars in the upper part of the constellation. Above these lies Spica.

Why are crows black? (According to Greek mythology)

Have you ever heard that crows are actually white birds? Long ago, crows were the servants of the sun god Apollo, and they were birds with beautiful white plumage that could speak human languages. One day, however, Apollo asked them to draw water, and they visited a spring. As the crows were drawing water, they notifced a fig tree, but its fruit was not yet ripe. The crows waited until the figs ripened, and ate them before returning with the water, making them very late. As an excuse, the crows brought back with them a snake from the spring, and told Apollo that it prevented them from drawing water. As punishment for lying to Apollo, the birds’ plumage was turned from white to black, and they forgot human speech.

Stellar Objections Expected to be Visible in May

Nagato has few buildings nearby, leaving its sky pitch black, and making the stars and moon seem that much closer. As we enter spring, the breeze at night begins to feel comfortable. Come take a look at the starry skies here amongst the mountains.